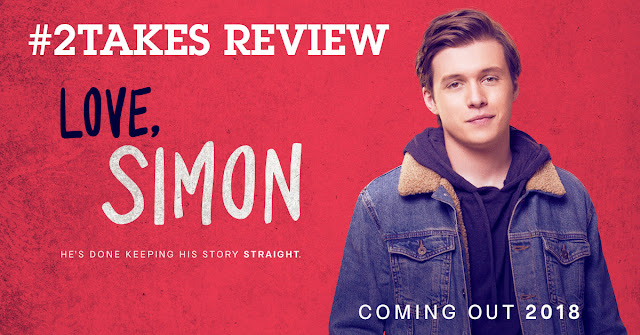 Love, Simon is a new film directed by Greg Berlanti based on Becky Albertalli's book 'Simon vs. the Homo Sapiens Agenda.'
We got a chance to watch it together a few weeks ago and after composing ourselves decided to write our thoughts about the film (which by the way will be released on March 16th!).

Take 1: Present Day Gaby Is Stoked About All This Great LGBTQ+ Rep

I never thought I would ever see a queer coming-of-age story released for the mainstream. And if I did, it would just have all the tropes that we are so used to. Going in to watch Love, Simon without knowing much other than a small synopsis was one of the most pleasant surprises. I absolutely loved it.
When I was in high-school finding positive LGBTQ+ rep was super hard. Aside from The L Word (I know...), LGBTQ+ characters were relegated to the token gay friend that had 3 lines of dialogue and always talked about their "partner" that you rarely got to see. Maybe that is the main reason that I don't see Love, Simon as the typical teen romantic comedy because for this community something like this has never existed. Sure, I can name tons of coming out stories on TV and film, both really good and really bad, but nothing by a big studio that would be so widely distributed or get this much publicity.
The story, the actors, the soundtrack... pretty much everything works seamlessly; it's hard to find something I disliked so I will just rave about what I thought were the best elements. Simon's relationships with his friends and family was my favorite. The movie might be marketed as a love story but the most poignant moments are when Simon has conversations with his family and friends. Which brings me to the actors. Nick Robinson does an amazing job leading the film, he's both charismatic but super relatable. He is so good at portraying Simon's vulnerability and weight of carrying around this secret, something I'm sure many LGBTQ kids will relate to. The whole cast manages to raise up an already great film and I could go on for ages about everyone, but I'll say that Nick's mom, played by Jennifer Garner, has a really touching speech that will live on in gif sets all over Tumblr.
My take:
Go watch the film and bring some Kleenex. Trust me, I wasn't one to cry when Rose let go of Jack at the end of Titanic but this movie had me sobbing internally and maybe a externally too.

Take 2: In Which Elisa Cried During Both Versions of The Story of Simon Spier

Gaby and I recently discussed the lack of LGBTQ+ representation in the media when we were growing up. The only things that sprung to mind were The L-Word, Rent, Queer as Folk and some some minor characters sprinkled in other shows, movies, etc. I still remember reading Hero by Perry Moore and the Rainbow Trilogy Series by Alex Sanchez and thinking it was okay to be different. So, I'll admit I didn't read Simon vs. the Homo Sapiens Agenda until after I watched the film but it reminded me how important those novels were to me in my youth.
Seeing a story like this released as a feature film is incredible and I'd've never imagined it twenty years ago. Love, Simon is a beautiful film about a coming of age, coming out story. The same can be said about the YA novel. There are quite a few differences between the two but both share the same heartwarming tale of Simon Spier who has found a confidant and love through emails to an anonymous classmate who, like Simon, also happens to be gay. I loved the way both versions dealt with the intense loneliness one can feel when harboring such a secret whilst experiencing the joys of falling in love.
Nick Robinson gives a perfect performance as the title character; vulnerable, smart and, as Gaby mentioned, completely relatable. His best friends are played brilliantly by Katherine Langford, Alexandra Shipp, and Jorge Lendeborg Jr.. They are the kinds of friends I hope everyone has in high school. Basically, the entire cast was fantastic. Special shout out to Jennifer Garner and Josh Duhamel for being an awesome set of parents.
My take:
Read it, watch it, weep. A truly beautiful film with a coming out story done masterfully. We both tried not to cry but utterly failed.