FlameCon Day 1 Recap: Queer Hollywood Then and Now + Some of Our Fave Artists 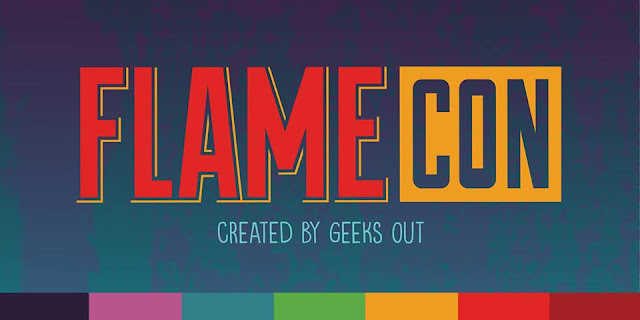 If I had to describe FlameCon in 3 words it would be: An Amazing Community.
What makes fan conventions beautiful is that it allows people to find others who enjoy the same things they do and connect with them. I think about them as "Tumblr-IRL." So, as someone who is part of the LGBTQ+ community, I was super excited to be able to attend FlameCon this year. Here are some of the highlights of Day 1:

The panel 'Queer Hollywood Then and Now' featured Vincent Rodriguez III and Mark Patton, and focused on their experiences when it came to auditions and roles they ended up playing. It was particularly insightful when it came to being typecast and how long they had to work and audition before they landed the roles they are now known for.
You can learn more about Mark Patton's documentary 'Scream, Queen!' here. And you can watch Vincent Rodriguez III on the first 2 seasons of 'Crazy Ex-Girlfriend' on Netflix. The third season premieres Oct 13, 8 EST on The CW.

A con is not a con without the amazing artists that gift us with their amazing creations. As I commented to my fellow fan, @corellianjedi2 , I love how unique and distinct all the prints, sketches, etc were on the show floor.

WAYHAUGHT! WONDER WOMAN! STEVEN UNIVERSE! ONE-STOP SHOP!
(I'm not usually an all-caps person but when it comes to certain fandoms I become an all-caps person)
The iconic cheerleader outfit and bulletproof-vest can be yours to own in pin-back button/mug/shirt form!
Booth #29

Person of Interest fan? Shoot shipper? Then you should definitely stop by Booth H87. The artist, June Kim, has a variety of manga prints featuring Root and Shaw, and they are really reaaaaally good.
Plus, if you're a Doctor Who fan, there is a Jodie Whittaker print of her as the new Doctor 😻
Booth H-87

What Would Evan Rachel Wood Do (if she saw this gorgeous print of herself rocking a suit)? Maybe one day we will find out...
Booth K-113