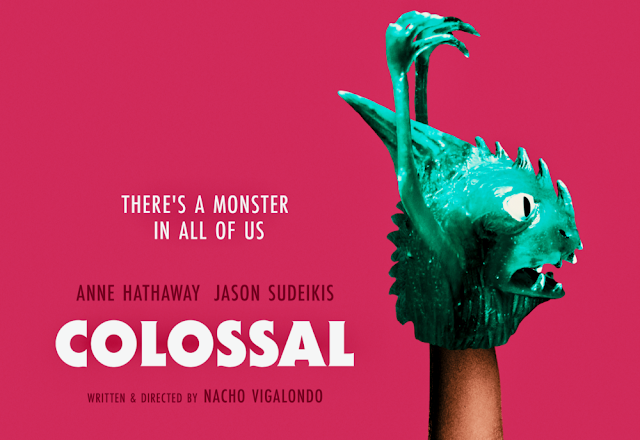 Legion M is the first fan-owned entertainment company that broke records during their initial phase of fundraising. Nacho Vigalondo's Colossal is Legion M's first foray into film! And a perfect one at that!

As a member of Legion M, I was lucky enough to attend the New York premiere of this hysterical and intelligent film.  Attended by stars Anne Hathaway, Jason Sudeikis and Tim Blake Nelson, along with writer/director Nacho Vigalondo, it was a thrill to be a part of Legion M history!

The film was absolutely brilliant! Hathaway was perfect as the woman with the...yes, 'Colossal' problem and a stunning performance from Jason Sudeikis. The twists and turns had me roaring with laughter and I had no idea what was coming next!

It's difficult to discuss the film without spoiling some of the great reveals but I will say the premise, a woman discovering she's a kaiju monster responsible for the destruction of Seoul, is genius!

The premiere was a blast! A couple of other Legion M members and I got to hang out at the after-party with Legion M heads, Paul Scanlan, Jeff Annison and David Baxter and we were able to meet Anne Hathaway, Jason Sudeikis and Nacho Vigalondo.

Do not miss Colossal premiering in LA and NY next Friday, April 7th.
And if you happen to be in New York next weekend, Legion M will be meeting up to attend screenings of Colossal at Union Square each day, April 7-9th. Contact us to learn more!

Be sure to check out (and join) Legion M!