My NYCC Wrap Up - Sunday Funday!

My Sunday was spent getting autographs! I managed to nabbed one of the last two Person of Interest wristbands (that whole process was also a mess, almost a bigger mess than Saturday but don't want to rant again. Ha!). After I grabbed that, I headed straight for the Minority Report autograph line! A buddy of mine, Stark Sands is one of the leads so I've been watching the show to support him! I'll admit, I've enjoyed it much more than I thought I would!

The signing was quick, as the cast was running late. Security and staff were also freaking out about photos being taken so, sorry, no photos from me. They brought the whole cast and the poster turned out great! 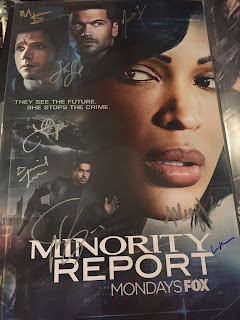 In between that signing and the Person of Interest signing, I decided to get my Angels in the Outfield poster signed by Mr Danny Glover! He was incredible kind and engaging and I really enjoyed the short time I was able to spend with him. He loved my poster, which is already signed by Joseph Gordon Levitt and Dermot Mulroney, and he and his team spent time just looking at it and commenting. So amazing. He inscribed it with "It can happen"! 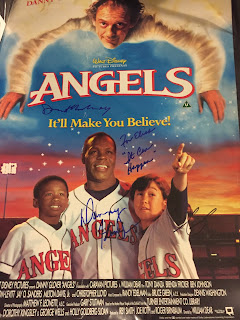 I headed back to line up for Person of Interest signing. Wasn't sure who would be coming but was excited nonetheless. POI is one of my favourite shows currently on network television and the fact that it received only a 15 episodes order this season makes me incredibly sad.

They ended up bringing the whole cast! Michael Emerson, Jim Caviezel, Amy Acker, and Sarah Shahi were joined by executive producers Greg Plageman & Chris Fisher and producer Margot Lulick! I was so excited when I got up to the table, I could barely speak. I think I mumbled something about how much I loved the show and thanked each one for their involvement. I also had a cast piece I'd been working on for a few years that I need Mr. Emerson to sign, as well as Mr. Fisher and Ms. Lulick! I accidentally had Ms. Shahi sign it again. Oops! I was so nervous because I am such a huge fan and was stumbling over words to tell her how much I've loved her in Life and other shows she done. I really really hope the show doesn't end this season and can't wait for the premiere on Oct. 27th! 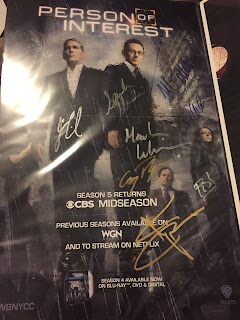 Following the signing, I was pretty much ready to head out. I decided I would go eat then head back in to hit the exhibition floor one last time. By the time I got back, there was only about an hour left. I headed straight for the publisher area because thats where I'd spent the least amount of time. Well, I walked away with about 20 books, most of which were free! Here's a selection of some of the free ones (mainly Star Wars books)! 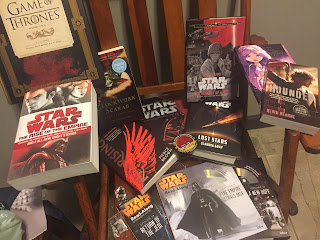 This year's con was stressful but ultimately quite a great experience. After being forced to miss out on San Diego Comic Con this summer due to an emergency, I'm not quite as upset.

Thanks for reading my rants and overly dramatic/wordy posts!
Until next time, follow me on twitter - @Corellianjedi2!